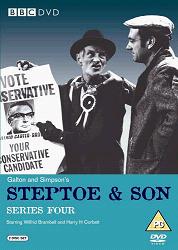 Today I received the latest Steptoe and Son DVD, containing all the episodes from the fourth series. And amongst them is the classic My Old Man's a Tory where Albert and Harold clash over their political views. Ironically the first Conservative of the day that Albert mentions is Enoch Powell, some years before his most famous moment. All in all it's one of the best episodes of the series I've seen, with fun such as the usual Albert and Harold fight as well as the Labour branch meeting (with both Harold and the agent sporting a mackintosh and pipe in the style of Harold Wilson!). There's also an interesting prediction when Harold is told that despite having lived in the ward all his life he is not considered a suitable candidate as the Labour Party wants to move away from the cloth cap working class image and be more appealing to the middle classes. It seems there was Blairism before Blair. Also look for the picture of Harold Wilson at the meeting, adorned with Union Jacks. When would we see Labour members today doing that to Tony Blair's picture?

(Also note the rosettes that Albert and Harold are wearing. Although it's black and white, they are clearly not wearing the blue and red ones familiar today. The 1960s was the fag end of the days when party colours varied widely across the country - the historian John Barnes has recalled that when he went out for his first canvass as prospective candidate for Walsall North in 1963 he was wearing a blue rosette - and was immediately kissed by a lady who had been waiting thirty years for a Liberal candidate! In that seat the Conservatives traditionally used red, the Liberals blue and Labor yellow, later yellow and red. Shortly after Barnes' adoption the local Conservatives chose a red, white and blue rosette.)

The whole DVD is full of delights. This series pioneered the classic sitcoms of today and I urge you all to take a look for yourselves.
Posted by Tim Roll-Pickering at 14:26