Doctor Who on 23rd November

Doctor Who began on 23rd November 1963 and, with the odd break, has been going ever since in one form or another. But what episodes were first broadcast on this date? Here's a rundown. 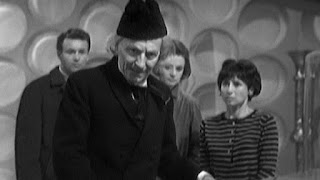 Two teachers curious about a strange pupil whose registered address is a junk yard. They decide to investigate and discover a strange man and a police box full of surprises...

The very first episode of the very first story (which has multiple titles in use), this one naturally appears and amongst fans it's probably the single least criticised episode in the entire history of the series. It introduces the basics of the series though there's a lot of the mythology that is established later on. 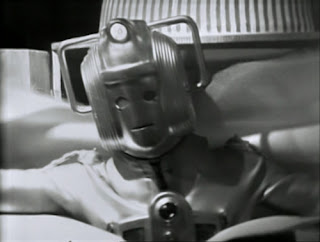 The Doctor and Jamie, with help from the newly formed Unit (United Nations Intelligence Taskforce), rescue fellow companion Zoe from the mysterious electronics businessman Tobias Vaughan, then continue to investigate his affairs only to discover he has some familiar business partners...

This is the only episode on the list which sadly no longer exists today due to the reuse of videotape. This may be the show's fifth anniversary but there's nothing in the episode that acknowledges this. Instead the story is looking to the future, serving as a pilot for a new format for the series that would become the norm in the next few years. This is a Cybermen adventure (particularly famous for the later scene where their invasion force marches down the steps in front of St Paul's Cathefral), but as is often the case with them they barely appear in the story and are only first seen halfway through this eight-part adventure. 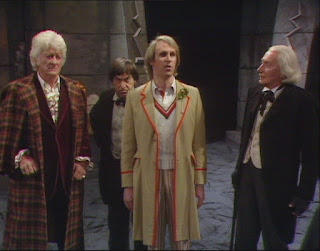 A mysterious individual lifts multiple past Doctors and their companions out of time and deposits them in the Death Zone, a dark dimension where creatures have fight to survive and discover the secret of the tower at the centre of it.

This feature-length episode celebrated the twentieth anniversary of the series and although in the UK it wasn't broadcast until the 25th November, it first aired two days earlier in the United States. Many past elements are reused in the story, although critics might note that the 1983 season had already seen use of Time Lords, the Master and the Brigadier (and would have also featured the Daleks but for a strike), but it works as acknowledgement of where the series has come from. 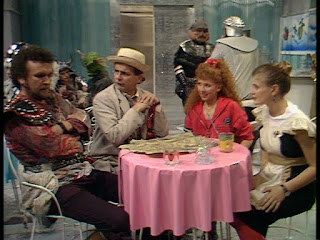 The Doctor and Mel come to Iceworld, an intergalactic Iceland, where amidst the frozen food they find their old friend Sabalom Glitz in trouble with the sinister Kane amidst stories of hidden treasure guarded by a firebreathing dragon.

At the time of transmission Dragonfire was billed as the 150th Doctor Who story, although this depends on exactly how some earlier stories are and aren't counted (other numbers range from 146 to 153), but despite this and the transmission date there's no acknowledgement of the anniversary (Glitz is just a link to the previous season, a common feature in a new Doctor's first year). Instead the show is again looking to the future and showing its experimental nature with this homage to cinema that draws on the likes of Aliens and Star Wars. It also introduces Ace, one of the best written companions in the series and the model for many in the modern era. 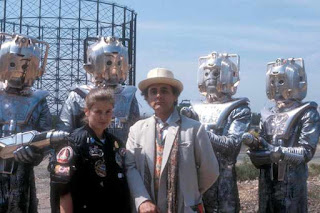 A group of Hitler supporting paramilitaries hiding in South America and wanting to establish the Fourth Reich, a 17th century lady with black magic powers, a bunch of alien invaders and the Doctor & Ace all converge on Windsor in 1988 where a comet crashes into the Earth containing a statue of unimaginable power...

For the show's silver anniversary the story does its best with limited resources, thus making a silver statue, a comet that comes near Earth every 25 years and silver aliens all key plot elements. The first episode also has a bunch of cameos from past cast and crew and even an almost encounter with the Queen. It's a fast paced runaround that does its best but there's another story in the season that has a stronger anniversary feel. 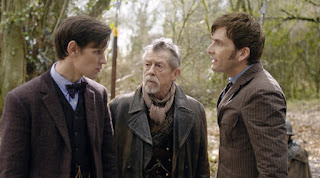 The Doctor's two most recent incarnations team up as their hidden past self struggles with the final day of the Time War between the Time Lords and the Daleks whilst Unit try to prevent a Zygon invasion of London...

The fiftieth anniversary of the series also serves as a conclusion to many plot points from the last eight years since the show's revival. As a result secrets are revealed, the years when the show was off air are addressed, there are returning old faces but there's also a clear statement for the future of the series. Elements have been building up for years and the result is a strong tribute to both the past and future of the show.
Posted by Tim Roll-Pickering at 17:38 No comments: