The BNP and polling

In the aftermath of Nick Griffin's Question Time appearance the BNP have soared ahead in the opinion polls. Or have they?

A poll done yesterday found they have 3% support, up a grand total of 1%. But 3% is what they got at the end of September. (UK Polling Report: YouGov verdict on BNP's Question Time) And 2-3% is how they've been generally doing in polls anyway. So despite all the outrage about the polls (see BBC News: BNP support in poll sparks anger) have we got nothing more than a standard statistical fluctuation?

Small parties are rarely the focus of opinion polls so there isn't a great deal of data to compare this one to. And the way a poll is asked can have a greater effect on a small party's result than on the larger ones - people are more likely to say they're voting BNP, UKIP or Green if the party is named in the initial list available than a generic "others" that leads to a further list. A specific poll focusing on a small party will bring similar name recognition.

The other results in the YouGov poll include a headline "22% of people questioned would "seriously consider" voting BNP". Actually it's 7% "definitely or probably" and 15% who said it's "possible". And the latter probably includes some "never say never" respondents. There is a poll from 2006 that lacked the "possible" option and found 20% would consider voting for the BNP.

There was also a question about positive/negative attitudes to the BNP, which can be compared to one taken after the Euro elections. Then it was 11% with a positive attitude compared to 72% negative. Now those figures are 9% and 71% - another statistical fluctuation.

Is there a "shy BNP factor" that makes people reluctant to admit to voting for the party? Probably - but one would expect it to be present in previous polls. And YouGov's online polling has frequently managed to penetrate the wall of embarrassment on other questions in ways that face-to-face and phone polling hasn't.

So what does any of this show? Well the overnight reaction is that despite a few headline claims there hasn't been any significant effect either way from Nick Griffin's appearance on Question Time. So far it doesn't appear to have been a major boost for the party, but neither has it delivered a knock-out blow.

But this is only so far. For a long time the BNP have benefited from the way opposition to them has been divided on several points, mainly over whether to challenge them directly or pretend that No Platform policies work in this day and age. (And although more minor, the way that some on the mainstream right seem to spend more time demanding the BNP be described as a left-wing party than anything else is really not doing any good at all.) Even now people are still arguing over whether it was right to have the BNP on Question Time and I fear the confront or marginalise debate will continue, to the BNP's advantage.
Posted by Tim Roll-Pickering at 12:34 4 comments:

I'm currently watching BBC News 24 showing the images outside BBC Television Centre as Nick Griffin arrives for tonight's Question Time complete with huge protests against this. And how does this look on television?

Well to be blunt Nick Griffin comes out better. He looks calm and reasonable, seeking to state his opinions and has accused the protesters of being organised by the Labour Party. The protesters look like a mob, with reports of a few arrests already.

Inviting Nick Griffin to be Question Time was always going to be a tricky matter. But the outrage, the protests and the huge publicity are just playing into the British National Party's hands. A large part of their message is that they are a party with "the truth" and "the answers" that "the mainstream political classes" don't want the people to hear. The reaction from both the protesters and some leading politicians only reinforces this.

But will we actually get a decent debate that exposes the BNP's woeful lack of policies? For instance will we hear their proposals on schools and hospitals? And will the other panelists be pulling them apart? Or will we get bogged down with just immigration and multi-culturalism whilst part of the audience tries to howl down Griffin, allowing him to evade being exposed whilst continuing to pose as a persecuted speaker of "the truth"?
Posted by Tim Roll-Pickering at 17:46 1 comment: 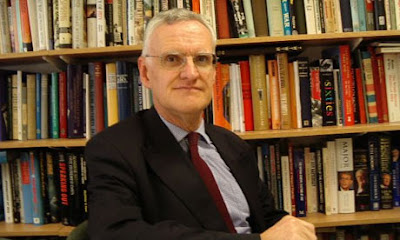 Earlier this week I received the shocking news that my PhD supervisor, John Ramsden, has passed away.

Peter Hennessy has written a wonderful piece at The Guardian: John Ramsden obituary and I don't feel I can improve on it. All I can add is that John was a fantastic and very supportive supervisor, providing much useful help and advice. He will be deeply missed.
Posted by Tim Roll-Pickering at 11:38 No comments:

The end of a-ha

I've just seen the news A-ha to break up after 25 years (BBC News). A pity - amongst many other things they did what is, in my humble opinion, the best ever opening song for a James Bond movie.

So in tribute, here they are performing it live earlier this decade:

Posted by Tim Roll-Pickering at 17:02 No comments: