David Campbell Bannerman MEP today defected from UKIP to the Conservatives. And cue the standard script whenever someone changes party:

The Losing Party: "The people didn't vote for this; there should be a by-election. This defection is just a spot of personal pique! Good riddance to good rubbish!"

The Gaining Party: "Our new recruit is a formidable politician who shows our party is a broad church able to reach out to all. And only a few partisan politicians want a by-election."

Has anyone ever known a serious political party tell a would be recruit that they cannot join until they first have a by-election?
Posted by Tim Roll-Pickering at 14:03 No comments:

A Conservative majority? Yes They Can(ada)!

Belated congratulations to Stephen Harper and the Conservative Party of Canada who last week won a majority in the general election. 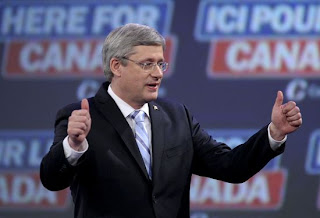 Yes after years of hung parliaments they now have a majority Conservative government. Additionally the Liberals crashed and burned badly, losing over half their seats including the leader's, and the separatist party was nearly wiped out.

I feel very envious of our Canadian friends.
Posted by Tim Roll-Pickering at 19:02 No comments:

The Alternative Vote referendum ended this week in spectacular style. After a lengthy campaign, and no end of debate in certain circles (especially Twitter!), the result is through and the message is clear - voting system change (let's stop pretending it's "electoral reform") is dead for a generation.

But there are other clear lessons from this exercise and some of them aren't so comforting.

Much of the country's recent experiences of referendums has, up to now, been limited. Some of the votes have been near invisible local ones. Others have had weakened or non-existent opposition. There are some exceptions, but by and large this vote has been the first time many have experienced a strongly contested vote, with all the campaign tactics and mud slinging that goes with it.

Many can be disappointed by the way both campaigns went about things, but at the end of the day this wasn't a politics lecture. It was a vote to decide an aspect of how the country is run. The tasks for both campaigns were to win the vote, nothing else. They set about that task using methods they believe work. But one campaign made some serious miscalculations about the public attitude.

The Yes campaign by and large pitched itself at something it believes exists called the "progressive majority" - the idea that Labour, Liberal Democrat, Green and Nationalist voters all belong to some grand tribe and that only splits between them have kept the Conservatives in power. But the harsh reality is that few voters identify with this concept - maybe a handful of the Guardian reading metropolitan liberals & intelligentsia (just look at the handful of areas that did return a Yes vote) but that's about it. It was also a dangerous strategy because it ignored the right and gave them no reason to vote for AV - simply having Nigel Farage on the list of AV supporters wasn't enough.

Furthermore a lot in the Yes campaign had for years believed the public wanted a change to the voting system and would flock to vote for one if only those wicked self-interested politicians would let them. Complacency ruled early on. They forget that whilst opinion polls had indicated there was a lot of support, most voters really don't have strong opinions on what voting system should be used and can be swayed by a campaign. Furthermore it really isn't a political priority for most voters beyond a certain set of chattering classes.

Now just for a moment change a few words in this. Imagine it wasn't an AV referendum but an EU one. Imagine the withdrawal campaign is pitching just for the right Conservative/UKIP voters. Imagine that many withdrawalists look to the opinion polls and take a vote for withdrawal as a foregone conclusion. And instead the stay in campaign mobilises well and secures a thumping victory.

It's not inconceivable. After all the right has its own kind of chattering class and obsessive, who don't always accept that their cause is not the public's priority, who don't realise more ground work is needed. To listen to some Eurosceptics you'd believe that all that's needed is to simply get a referendum called and everything else is a formality.

That kind of complacency is dangerous, but it's present behind most of the calls for an immediate referendum on withdrawal. More must be done before that happens.
Posted by Tim Roll-Pickering at 12:05 No comments: