For those who haven't seen it, a motion has been tabled in Havering council for the borough to renegotiate its relationship with London. (More details in the Evening Standard: "'Hexit' vote to be held in bid to solve London borough's 'identity crisis'".) Dubbed "Hexit", this proposal, submitted by a Ukip councillor, has generated some interesting posts.

One that caught my eye is Jonn Elledge's piece in CityMetric "The threat of Hexit: could the London Borough of Havering really be about to secede from the capital?". In it he suggests this is because Havering's demographics are far removed from the rest of London. However there are some more obvious reasons why many in that borough in particular haven't always felt part of London.

Havering, for those wondering, is the eastern most London borough. It's named after a royal manor (recorded in the Domesday Book as "Haueringas") which in turn gave its name to a palace and then the village of Havering-atte-Bower ("atte-Bower" means "at the royal residence"). As with a number of other London boroughs, "Havering" is a compromise name, in this case using the name of a small settlement rather than dealing with the rivalries between Hornchurch, Rainham, Romford and Upminster. (Merton and Haringey are similar examples.)

(To save time in the rest of this post, I'll use "Havering" to refer to the area of the current borough, including before its formation.)

Greater London has been around since 1965 but a glance at various maps (all from Wikipeda) will show how both before and afterwards various definitions of "London" have missed out Havering. Let's start with the Metropolitan Police District, which before 1965 was often used as a formal definition of "Greater London" when urbanisation took the natural metropolis beyond the London County Council boundaries. 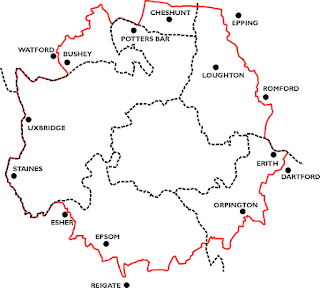 (The Wikipedia file for this map is confused as to whether it's for 1933 or 1946, but for this post's purpose the relevant part of the boundary is the same.)

Note that in the years leading up to 1965 the Metropolitan Police District incorporated nearly all of what came under the Greater London Council (and some parts that didn't), but there is one conspicuous exception on the map. In the original proposals, it wasn't the only one, but Esher was one of a number of authorities around the edge of the proposed Greater London that were initially to be included but which successfully secured exclusion. Romford, however, tried and failed. 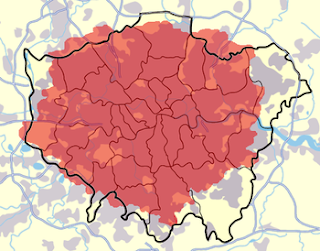 Note that almost he whole of Havering is outside the London phone code. Sure it's not the only area but it's the only omission that almost completely aligns to a single borough.

A smaller area is the London postal district. Postal addresses are often confusing because they haven't always been adjusted with local government changes, and London is one of the worst areas for this, not having been revised in the 1960s, partially due to funding, partially due to potential confusion between the LONDON postal town and a Greater London postal county. (MANCHESTER and Greater Manchester suffer similar problems.) As a result, the LONDON postal address covers a smaller area than the whole of Greater London: 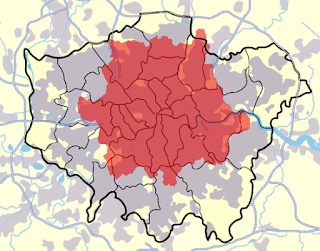 Havering is one of three boroughs that have no "LONDON" addresses in them at all. (The other two are Hillingdon and Sutton. Some of the other boroughs have only very slight coverage - as little as one road in the case of Harrow.) A related issue is the continued use of "Essex" in addresses. Until 1996 it was a requirement in much of the UK for postal addresses to include the county of the postal town used, even when the postal counties no longer aligned to administrative boundaries. (The Wikipedia article Postal counties of the United Kingdom has the basics.) One curiosity is that "Essex" was never actually needed for address in the ROMFORD postal town. It was one of the 110 towns that did not require a county due to their size (or giving their name to the county).

The requirement for a county was formally dropped in 1996, largely due to a change to optical character recognition technology that did not need it. (But also, another round of local government reorganisation can't have enthused Royal Mail, especially given the confusing situation of some counties like Berkshire continuing to exist without a county council but others like Humberside being almost completely abolished. Just to make matters worse, the changes came in stages.)

Now these maps are obviously not the be-all and end-all of the situation and there are many other ways in which Havering gets the London experience (Freedom Passes for a start). But they do show some of the problems in forging the London identity when not every institution and service uses the same boundaries and thus for many residents "London" is not an ever present part of their own home lives, instead often being something elsewhere. And whereas in much of Greater London the 1965 expansion was clearly a case of administration catching up with the expansion of the metropolis, in the case of Havering London-wide bodies all suddenly arrived at once. It's surprising how long it's taken the 1965 changes, both to the London boundary and the individual boroughs, to settle in. Even today you can find boroughs still pursuing policies to integrate their separate components, such as "one borough" mottos or locating new council buildings directly on the old internal boundaries.

If the postal addresses and telephone codes had been adjusted back in the 1960s then it's probable this issue wouldn't have come up. That, rather than the demographics, seems the more likely explanation for the underlying issues behind this, even though the Hexit vote itself feels more like posturing by a political party in severe decline.
Posted by Tim Roll-Pickering at 13:40 No comments: