Ken Clarke has announced he will contest the Conservative Party leadership. Now the contest begins in earnest. And Clarke is the man to bring fear to Blair and Brown, the man to revitalise the party and lead it to success.

Go Ken Go!
Posted by Tim Roll-Pickering at 20:55 No comments:

Only two months and fifteen days after he declared that there were too many candidates for the Conservative leaderhsip, Tim Yeo has now followed his own advice and reduced the number in the field. Whilst I cannot fault his decision to back Kenneth Clarke, who everyday seems to defy critics who've written him off, I hope that whoever is elected leader will remember Yeo's advice and inaction when it comes to forming the Shadow Cabinet.
Posted by Tim Roll-Pickering at 01:23 No comments:

Barely a week after the death of Mo Mowlam and now Gerry Fitt has died. Fitt was perhaps the first prominent Nationalist politician to realise that the problems of Northern Ireland needed to be solved by reconciliation between the communities rather than from some "victory" over the border. Fitt has been reviled by many Republicans for being seen as too British but he was one of the driving forces for the Sunningdale Agreement, the aborted forerunner of the Good Friday Agreement. By accepting the need for a power-sharing internal settlement, the Republicans who revile his name have accepted Fitt's argument completely. In years to come Fitt will be truly vindicated.
Posted by Tim Roll-Pickering at 16:42 No comments:

BBC News is reporting Mo Mowlam's health as 'deteriorating' and the Evening Standard claims she is "near death".

Whatever the respective roles in bringing about the negotiation and partial implementation of the Good Friday Agreement, Mowlam has long been widely admired for her fight against a brain tumour and the way she refused to let it stop her from continuing working. Since leaving Parliament she has pursued a career in the media and will be especially remembered for the Greatest Britons series when she advocated the case for Winston Churchill who then won convincingly. She will be much missed.
Posted by Tim Roll-Pickering at 18:29 1 comment:

And so once again there's debate about A-level results. If the results came out in the middle of October there would never be the amount of attention that they get in mid August when nothing else ever happens.

Once again people are claiming that A-levels are getting easier because more people are passing. Athletes are competing the 100 metres ever more faster - by the same logic does that mean 100 metres is getting shorter?

Rather than yet another upheaval of post 16 education, why don't we just stick to the current system and enhance it. It does schools and pupils no good to be constantly trying to undermine the value of their qualifications and constantly imposing new directions on them.
Posted by Tim Roll-Pickering at 17:41 No comments:

And so today I turn twenty-five, clocking up a quarter of a century. Having a birthday in mid August has often felt anti-climactic due to everyone being all over the place. Often I've been away from home - spending birthdays in places such as Kenya, Tunisia, Yugoslavia (as it was - now Croatia), Austria, the Netherlands, Shropshire, Westmorland or right now Lanarkshire - and this can often split up celebrations even further.

August is also a rather dull time for anything happening in the wider world - once for a study task I looked up the newspapers from the week when I was born to find out the major news stories of the time. It was the battle between Jimmy Carter and Edward Kennedy for the 1980 Democratic Party nomination for the US Presidency. This is hardly exciting stuff at the best of times! The Sun this week has it even worse - a front cover devoted to astronomers discovered a bunch of stars that can have lines drawn between them to look like Victor Meldrew! BBC News's "On This Day" feature for August 11th usually highlights Edward Heath's greatest achievement as Prime Minister - leading the country to victory in the 1971 Admiral's Cup - and the Kray brothers being allowed to go to their mother's funeral. The other big story is the eclipse of the Sun in 1999 - but in the broad scheme of things this is not particularly distinct on an international scale. And a quick glance at the Wikipedia page for today shows a good number of people were born on this day but the only names I recognise are Jerry Falwell (the US televangelist), Pervez Musharraf (President of Pakistan), Ian McDiarmid (Emperor Palpatine in most Star Wars movies), Hulk Hogan (the wrestler), Sylvia Hermon (Ulster Unionist MP for North Down) and Jim Lee (the comic book artist).

To some twenty-five may not seem much at all. To others it seems like a great age! Personally I feel it's just another milestone on life. The past quarter of a century has had its ups and downs but it has in general been fun. And the future, well who knows? But it will be interesting finding out!
Posted by Tim Roll-Pickering at 13:59 2 comments:

Robin Cook died today. It seems strange that he's gone so early - like Donald Dewar he died when many expected him to make further major contributions to British political life. There is now a big hole in his part of the Labour Party. For many Cook will be remembered as the first New Labour Cabinet minister to resign on a point of principle and for his Howe-like resignation speech that so devastated the government case for war in Iraq. He will be much missed.
Posted by Tim Roll-Pickering at 22:51 1 comment:

The most beautiful site in all the world

Recently I once again visited the site in the universe I believe to be the most beautiful above all others - Amersham Old Town. The view from Parsonage Wood over the old town is spectacular - the Buckinghamshire countryside at its best. There is something magical about the combination of rolling green hills, the large fields, the old church and old town around it that always makes me want to come back for more.

Maybe one day I'll earn enough to have a place up there. Until then I can but dream...
Posted by Tim Roll-Pickering at 21:09 2 comments: 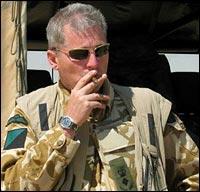 So far the Conservative Leadership Election has focused on MPs at Westminster. But unless I've missed a modification of the rules, candidates don't actually have to be MPs to stand.

At the moment politics needs a lot of new blood and dynamism. The Conservative Party needs a leader who can lead, who can inspire, who can motivate and who can deliver. Why not be really radical and search for a person outside Parliament or even outside party politics who can provide this?

My suggested candidate at this stage? Colonel Tim Collins.
Posted by Tim Roll-Pickering at 15:10 No comments:

What the heck is a county?

Today I received payment for an item I'd sold on eBay, together with a print out of the eBay payment details page. This included the payer's address, which is in "Swansea, Swansea"!

What had happened is that the form for address includes a compulsory option for "county" and this proforma isn't very good at handling large urban areas. I have often had to put "London" as both the "town/city" and "county" when filling out forms and I'm sure there are many other cases. But what county am I supposed to put?

Counties are a notoriously difficult beast to classify. For some bizarre reason the UK has traditional counties, administrative counties, ceremonial counties and postal counties, each with their own set of borders, identities and so forth. Many talk of Romford as being in Essex and Bexley as being in Kent, yet both come under the Greater London Authority. Or my hometown is Epsom. This should be simple - it has the postal address of Surrey, comes under the domain of Surrey County Council and the ceremonial county of Surrey (I think the two are the same - there are no unitary authorities there) and is historically identified as Surrey. So it should be simple. But within Surrey just where is it? Is it in north east Surrey (as the full name of NESCOT, the local Further Education college implies) or in mid Surrey? The home of Surrey County Cricket is the Oval, quite some way to the north, yet hardly anyone uses "Surrey" on addresses up there. And what about Spelthorne (Sunbury and Staines)? It is on the "Middlesex Bank" of the Thames not the "Surrey Bank", yet is in Surrey. The village of Poyle doesn't seem to know if it's in Middlesex, Surrey or Berkshire. And then people claim Westmorland doesn't exist as a county - so what is the Westmorland County Agricultural Show?

The traditional and administrative counties both have fierce advocates and idenfitications do differ across the country. Some try to claim that as "county" is only a unit of local government then only these should be used, even when the term is applied to Unitary Authorities. So does Northern Ireland have six counties, twenty-six "counties" or none at all? (Now there's one for the Republicans to mull over, especially as their stated objection to the term "Northern Ireland" is pedantically to do with a part of the Republic being even more north!) Also Rochester by this logic is not in Kent as it's not administered by Kent County Counil but instead by the Medway unitary authority.

Conversely we have the question of whether or not Birmingham is in Warwickshire, the West Midlands County or is just a big city in its own right (I go for the latter - it's easier and Birmingham is a place unto itself). Some of the modern administrative counties and urban areas have done a brilliant job of fostering loyalties and making it clear just where the current borders are. Others haven't - London is a mess (and the Post Office doesn't help by refusing to update the post codes).

At the moment I type this in Forest Gate, in the London Borough of Newham but formerly in the County Borough of West Ham (and there are still in use street signs proclaiming that!). So just what am I supposed to put in the "county" box on a form?
Posted by Tim Roll-Pickering at 14:35 No comments:

Who's running the Home Office?

Home Office Minister Hazel Blears has had to assert that she, not David Blunkett, is running the Home Office whilst Charles Clarke is on vacation. Once again we have the annual New Labour summer farce of ministers conducting a public turf war rather than getting on and running the country. Have they nothing better to do?
Posted by Tim Roll-Pickering at 11:06 No comments: