The problem of rewriting the dictionary - Labour and antisemitism 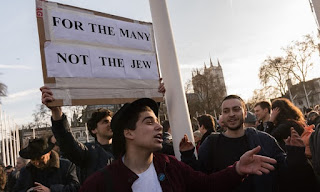 As an outsider looking in, Labour's repeated problems with antisemitism seem almost surreal. How is it that the party has got itself into this mess? Why is it so reluctant to accept the standard definition of antisemitism? Why is there so much resistance to allowing Jews to determine when they've been discriminated against? Why is a Jewish MP being disciplined for calling out antisemitism in the party?

At first I couldn't understand it. But then the more I thought about it, the more an answer suggested itself. A lot in the Labour Party and on the left more broadly have got themselves into a complete mess because they've gone down a route of limiting the definition of terms such as "racism" and "sexism", to the point that they've predetermined who can and can't experience them, creating problems when this definition conflicts with reality.

I first noticed this many years ago in student politics (where I encountered a number of people who are now Labour MPs - or ex ones - across all sections of the party). It was particularly noticeable that a good number of people in and around the "Liberation Campaigns" (Women's, Black, LGBT, Disabled Students) of the National Union of Students had a pretty firm notion of sexism and/or racism that rejected the idea some people could experience them - "men don't suffer sexism" or "white people don't experience racism". (The use of the terms "homophobia" and "ableism" instead of "sexualityism" and "abilityism" somewhat diminished the issue there.) Instead everything was viewed through the prism of liberation theory, regarding these terms as meaning societal structural oppression and a clear hierarchy of oppressor and oppressed (with detailed tiers for those who experience multiple repression). Aligned to this is the view that only those experiencing repression could say that that is what it is.

But this approach has the effect of a siege mentality with some pretty rigid views on who is contained within the siege. And it also leads to confusion, argument and alienation as genuine concerns about discrimination in the reverse to standard form get brushed aside and potential allies alienated. It also isn't very good at coping with the idea a group of people can be both oppressors and oppressed depending on the context.

To cut to the chase, the Israel/Palestine situation is a complex matter of the kind that doesn't lend itself to easy solutions by shouting slogans. So naturally it attracts those for whom protesting and shouting is the solution to a problem. And whilst Jewish people may be the majority in Israel, they are a minority elsewhere, thus in both positions. Plus a lot of antisemitic rhetoric accuses Jews of having too much power - attacks on bankers, "Jewish world conspiracy" and so on.

Consequently a significant part of the left has wound up defining "racism", and thus "antisemitism" in such a way that just cannot understand a lot of the antisemitic rhetoric flying around. Its whole outlook does not allow Jews to define antisemitism, especially in regards to rhetoric around Israel, because that completely undermines a world view in which everyone is either an oppressor or an oppressed and they've already allocated the former category.

If the left is to overcome its problems here, it has to move beyond such rigid liberation theory and accept a more broader definition of discrimination, racism, sexism and so forth. Otherwise it will continue to cause pain and hurt whilst not actually solving things.
Posted by Tim Roll-Pickering at 12:45 No comments: