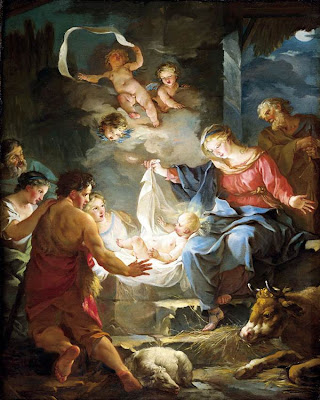 Posted by Tim Roll-Pickering at 06:00 No comments:

Email ThisBlogThis!Share to TwitterShare to FacebookShare to Pinterest
Labels: Christmas 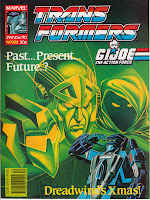 Another blast from the past, this time a reminder of a particularly madcap issue of one of my childhood comics, the British version of Transformers which combined reprints of stories from its American counterpart with newly originated tales of the toys. Issue #302 came out just before Christmas 1990 and contained the year's seasonal tale, Dreadwind's Xmas. (Thanks to Blimey! It's another blog about comics! for recently publishing scans of the story at Christmas Comics: TRANSFORMERS (1990).)

Christmas stories are something of a tradition in British comics, even action adventure ones such as Transformers. They would tell a (usually) one-off tale with some festive whimsy as an interlude from the ongoing saga.

The problem is that this was often heavily at odds with the genre and tone of particular titles, and as a result many of these were at best forgettable, at worst they were so dire they lingered in the memory rather longer than they should have.

Transformers was a tale about two warring factions of an alien robotic race, with some humans caught up in their war as well. Such a scenario does not easily lend itself to the Christmas spirit and the results were messy. There was one where a super powered human was about to destroy an Autobot (one if the good guys) when suddenly midnight struck and she had an immediate change of heart. Or another when one of the meanest Decepticons (the bad guys) was depressed and homesick, so a kid decided to try and explain the meaning of Christmas to him, without much success until suddenly a wave of enlightenment came out of the blue. Then there was the Autobots' leader Optimus Prime trying to decide how to use a small piece of life bringing energy until he discovered environmentalism (well it was 1989).

But perhaps the weirdest was 1990's offering, the short text story Dreadwind's Xmas! The story was related to the-then change of letterspage answerer.

For most of the run the comic's letterspage was supposedly answered by one of the Transformers themselves. It made for a more interesting experience as the character gave more personalised responses, including their own opinion about events and characters and the failings of the humans working on the comic (called "stubbies"). It was fun, but every few years there was a change of character to a newer toy. One such change came in issue #300 when the Decepticon Dreadwind was replaced by the Autobot Blaster. However the introductory page told us Dreadwind was resisting and had barricaded himself in his office. And so we came to Dreadwind's Xmas!

The story tells of how on Christmas night "Ebeneezer Dreadwind" is visited by three spirits who confront him about his bitterness and occupation. Eventually Dreadwind cries and gives in, leaving Earth... to plan his revenge on the spirits.

A neighbouring column put it best: "What the Dickens?"

Even by the standards of comic Christmas issues this one was especially bizarre. It's unsurprising that the tradition was abandoned after this even though the comic lasted just over another year.

By issue #302 it's hard to dispute that Transformers was rather past its prime (no pun intended), with the British originated strips having first lost colour then disappearing altogether in favour of reprints of old British stories. (Hence the Christmas story this year being a brief text affair rather than an actual strip as in previous years.) But in the wider world of comics a licensed title based on a toyline that lasts even four years is quite an achievement, let alone the seven plus that Transformers eventually clocked up. And even in its last years the comic was still a joy to read.

(This longevity brought its own problems. The conventional wisdom in British comics is that the readership almost completely turns over every few years. Hence many long running titles resort to repetitive plots and reprints. But when a title has a cult following - and even during Transformers's run this following was already manifesting itself - the proportion of readers who've already seen the material is very high and can be easily alienated and so attempts to economise had a steady corrosive effect. But even this didn't end things - rather it was the American title going under and cutting off the supply of new-to-the-UK material that killed Transformers altogether.)

The toyline is still going all these years later and still has a lot of tie-in fiction, from blockbuster movies to fan convention comics. Amazingly the British comic's legacy is strong with many characterisations and themes (including its version of the origin of the Transformers) still follow its lead. Not a bad legacy for a weekly comic that wasn't even published in the toyline's countries of origin. 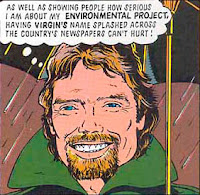 Transformers has also left a surprising legacy in the wider world, one that not many people will realise it started. For in issue #160 (information at Transformers Wiki: Salvage!) saw a guest appearance by a prominent British businessman who would go on to make many other guest appearances in all manner of fiction. Yes Transformers is responsible for starting Richard Branson's quest to get a cameo in just about everything!
Posted by Tim Roll-Pickering at 19:26 1 comment:

Images from the Past: Thirty years ago...

And I don't mean the last episode went out and it didn't come back, like many a show. No it truly ended.

I've shown this clip once before, but it's so striking here again is what went out just after 8pm on that day in 1981:

Can you imagine the BBC today showing something so bloody and bleak not just at any 8pm but just four days before Christmas?
Posted by Tim Roll-Pickering at 20:00 No comments:

There's a brilliant advert put out by Nando's, starring a man who has lost another friend this year and reflecting. Here's the full version:
Sadly threats of violence against Nando's's Zimbabwean staff have resulted in the advert being withdrawn. But time is running out for Mugabe.
Posted by Tim Roll-Pickering at 00:48 No comments: