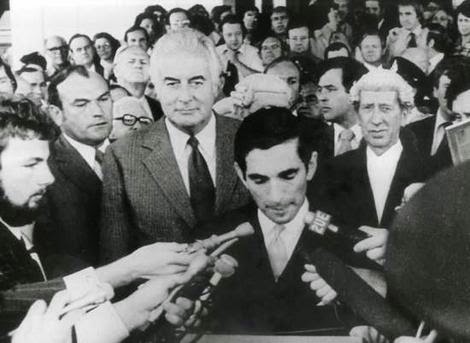 Gough Whitlam is probably the most intensely studied of all Australian Prime Ministers, not just in his home country but around the world. In just three years he brought sweeping changes to Australia, whether in education, health, foreign affairs, relations with indigenous Australians, the government of the Northern Territory and so much more. Even the Queen's title was changed to be more Australian.

It is in constitutional affairs that Whitlam attracts much global attention. Literally from its very first moment to its very last his government saw precedents broken and argument ensued. Rather than wait the customary period to assemble a full ministry and take office, he instead had himself and his deputy sworn into no less than twenty-seven different posts just a few days after winning the 1972 election in order to hit the ground running and immediately start implementing the government's agenda. Over the next few years more precedents would be broken and the two sides of Australian politics would fiercely argue over what practices were fundamental constitutional conventions and which were optional agreements to be set aside as and when.

Throughout its three year life the Whitlam government struggled with a hostile majority in the Senate. More legislation was blocked in three years than in the entire preceding seventy-two years of the Australian federation. Not even a "double dissolution" - a full election of all seats in both houses - resolved the gridlock beyond a few individual bills being passed (though they included the introduction of universal health care). How casual Senate vacancies were filled became another battleground with both sides crying foul about particular vacancies in Queensland. And then the Senate obstructed Supply, leading to Whitlam's dramatic dismissal by the Governor General Sir John Kerr on 11 November 1975. (The above picture is of Kerr's Private Secretary, David Smith, reading out the proclamation of the dissolution of Parliament in less than ideal circumstances with Whitlam literally glaring over his shoulder.)

Beyond the personalities and the use of the reserve powers of the Governor General, the Dismissal was a struggle over competing visions of how parliamentary democracy works in an elected bicameral system. It was more than just a dispute over the specific issue of both houses having powers over supply - the Senate was blocking much other legislation as well - and went to the heart of democracy and mandates. Did a government with a solid majority in the House of Representatives have the right to govern or did the Senate have the right to veto bring it down? Which democratically elected body was more democratically elected? Was it right for an upper house to demand an early election just because the political wind was blowing the opposition's way? Those considering elections for the British House of Lords would do well to look at the struggle between the Senate and House of Representatives in the Whitlam era to see how conventions are not enough to prevent check & balance powers being used for naked partisan aims.

The disputes about 1975 will last forever. Whitlam is probably arguing about it with Kerr right now. On this mortal coil we must look to see how these messes can be avoided.
Posted by Tim Roll-Pickering at 00:43 No comments:

What is the Westminster Parliament?

I'm sure some of you have rather blunt answers.

But the question of just what Westminster is lies at the heart of much of the debate about devolution and non-devolution. And the answer affects proposals for tackling the problems caused by devolution.

This applies as much to the House of Lords as much as the House of Commons. The Lords rarely gets a look-in when it comes to the West Lothian Question but if anything it presents even more challenges than the Commons. (And simply waiting for Lords reform is an unrealistic solution; besides some of the proposed alternatives present the same problems.)

Fundamentally the question boils down to whether the Westminster Parliament and Government are there to serve:

Or
The answer is probably, in that typical British fashion, somewhere between the two without much thought as to precisely which. But we now have a greater focus upon the anomalies. And without consensus on what we have at the moment it's hard to obtain consensus on whether change is needed and if so what to.

At present Westminster largely operates as a UK entity. It is much harder to surgically extract "English-only matters" than many cries suggest. Taxation is a UK-wide matter. Most government departments combine UK and English elements - for instance the Department of Health runs the English NHS but also does UK-wide work such as negotiations on international reciprocal use agreements. And the Barnett Formula that determines the funding for the devolved nations is based on spending in England. It would take a major overhaul of how Westminster is structured before one could start restricting the voting rights of some MPs.

(And although you could assign the Bishops as "English" it would get messier to divide them up by regions. Only five sees have permanent places in the Lords and the other twenty-one are the most senior representing the Church of England as a whole rather than their individual dioceses. Plus many dioceses cross regional and local government boundaries.)

I'll just add that this part of the problem doesn't necessarily go away with Lords reform. A number of proposals for both appointed and elected upper houses include UK-wide members, whether appointed by Westminster or elected by some of the PR systems.

Now one could undertake a major restructuring within Westminster. But whilst that would make it easier to determine what is and isn't an "English-only matter" it would not address the basic problem of having different majorities on different matters. Could Westminster actually function if conflicting majorities within a single chamber start voting in direct contradiction? Could a minister with a joint English and UK ministry find themselves appointed by one majority and then immediately no confidenced by the other? If a separate English executive was elected by the English-only MPs (let's just leave for now the question of matters devolved to Scotland but not Wales) then you could get the First Minister of England serving also as the Leader of the Opposition of the United Kingdom. Conflict could reign supreme and non-English MPs could get shut out of contention for leadership roles.

What sounds like a simple elegant solution brings a whole minefield of problems with no easy resolution. A more lasting solution must leave each body with a single function, even if some asymmetrical arrangements have to be put in place.
Posted by Tim Roll-Pickering at 12:16 No comments: