Yes my blog posting rate has plummeted again. And yes it's for much the usual reason.

I hope to post more soon including a particular piece of news that many have been waiting quite some time for. So please watch this space...
Posted by Tim Roll-Pickering at 23:46 2 comments:

Email ThisBlogThis!Share to TwitterShare to FacebookShare to Pinterest
Labels: quietness

Graham Evans MP has tabled one of the best Early Day Motions ever. It reads as follows:

I wonder how many MPs are going to sign it? Details here.
Posted by Tim Roll-Pickering at 23:30 No comments:

One of the myths frequently bandied about the British voting system is the claim that it somehow creates an artificial North-South divide in politics. The argument runs that under a different voting system the country would be politically more mixed. It's an interesting argument, if based in some misassumptions (the divide is really metropolitan vs the rest - in the last election northern market towns and rural areas swung on a similar scale to their southern counterparts), and no doubt we'll be hearing people make it in the forthcoming AV referendum. But it ignores the fact that such divides are rooted in social & historical factors that are the backdrop to people's political outlooks, and can occur under all manner of voting systems.

Such divides exist in other countries, even when using proportional representation or holding a direct election. Yesterday was the second & final round of the Polish presidential election and the election map shows some interesting features. Here is the map of the first round results with Bronisław Komorowski of the Civic Platform in orange and Jarosław Kaczyński of Law and Justice in blue: 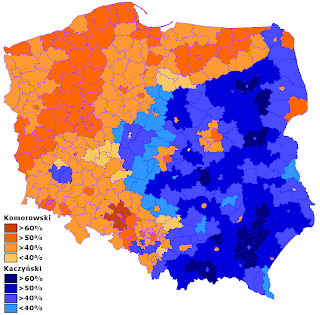 It's an interesting map of support and people may have recognised the historic boundaries it roughly follows. But the first round was not a isolated case - here's the second round: 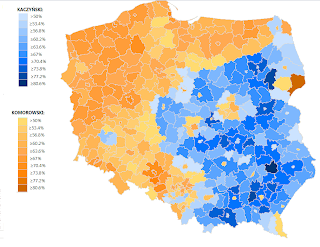 Exactly the same pattern. It was also seen in the last parliamentary election as well: 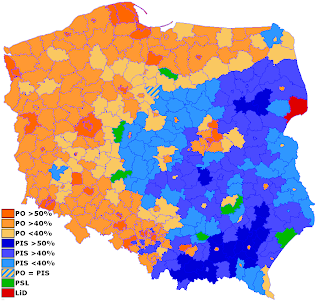 The parliament is elected by party lists in multiple constituencies (the system most of the UK uses for the European Parliament).

For those still wondering, the map of party support almost exactly matches the pre First World War boundaries between Germany and Russia (when Poland was still partitioned between them). Regardless of whether the nature of the political divide can trace itself back to that time, despite several movements of boundaries and populations since, it is a stark divide. The use of either proportional representation or a single nation wide election hasn't shifted it, and I doubt any voting system change in the UK would have a effect on our geographic political divide.

See also Strange Maps: 348 – An Imperial Palimpsest on Poland’s Electoral Map which has independently noted this phenomenon.
Posted by Tim Roll-Pickering at 00:03 2 comments: