In 1968 a senior Conservative Shadow Cabinet member and former Minister of Health boldly took a stand against not only the government's proposed legislation on immigration but also in contrast to his own party's support or it. It was a brave move but very characteristic of a man who is in many ways the ancestor of much of the modern Conservative Party.

That man was Iain Macleod, who died forty-four years ago today. 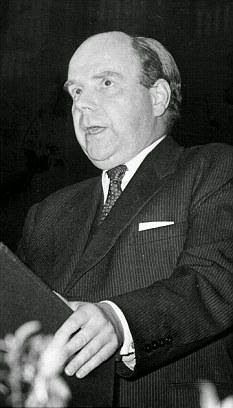 Macleod did not initially seem destined for a political career. Born to a GP in Yorkshire but from the Western Isles, he at first undertook a career as a professional bridge player, even being on a team that won the top award. He would subsequently write a book entitled Bridge is an easy game; a title I cannot agree with. But then came the war in which he served with distinction and was severely wounded. Throughout the rest of his life he was often in great pain, a sight all to obvious when he made many of his great speeches. But he did not regard his pain as a great disability in politics - after all how was it bad thing to be a Conservative who couldn't look over his left shoulder?!

He turned to politics, notably standing in 1945 as the Conservative candidate for the Western Isles despite there being no Conservative Association there. He and his father held a meeting of themselves and emerged as candidate and association chairman respectively. Subsequently Macleod worked in the Conservative Research Department and contributed radical ideas to the post war reimagining of Conservative aims. Elected in 1950 for Enfield West, Macleod was one of many talented Conservatives to enter Parliament that year who would dominate politics for the next quarter of a century. He soon proved his great oratory in a debate on the Health Service and in 1952 because the first of his intake to head a ministry when he was appointed Minister of Health, albeit outside the Cabinet. (In those days not all heads of department served in the Cabinet and Churchill's style at the time was to have a smaller team of "Overlords", including some non-party cronies, taking general responsibility for direction whilst leaving the detail outside.) Over the next decade he served in a variety of posts including Minister of Labour, during which he defeated a bus drivers' strike, Secretary of State for the Colonies during which many got their independence, and then jointly as Chairman of the Conservative Party and Leader of the House of Commons. These two roles were hard to mix, the one requiring a non-partisan consensual approach, the other a robust partisan. (Subsequent Leaders of the House who have combined it with a campaigning position have had similar problems. William Hague please take note.)

He was a man that many modern Conservatives have much in common with even if they don't realise it. A moderate laissez-faire in economics (in 1965 he remarked on Powellite economics that "I'm a fellow-traveller, but I prefer to get out one or two stops before the train crashes into the buffers at the terminus") and a supporter of liberal causes and keeping the state out of enforcing morality, he was also prepared to take bold stands against his own party's right. As Colonial Secretary he realised the Empire was dying on its feet and it was essential to decolonise quickly even when it meant ignoring the entrenched privileges of colonial elites - in response to those who argued he moved too fast he replied "...although it was extremely dangerous to move quickly it would have been far more dangerous to try and hold back..." This may have cost him any chance of the party leadership but he remained convinced he had done the right thing and, in his close friend and biographer Nigel Fisher's words "saved Africa for the Commonwealth". He disliked the word "Conservative" but oddly preferred "Tory", looking to the traditions of Disraeli and Lord Randolph Churchill.

In early 1968 Britain faced the prospect of hundreds of thousands of white and Asian Kenyans coming to the UK as the recently independent country pursued a policy of Africanisation, including the outlawing of dual citizenship. Few batted an eyelid at the prospect of white Kenyans coming to the country - indeed previous legislation had left open the relevant loophole precisely to allow their entry. The Asian Kenyans provoked a very different response. The Labour government introduced the Commonwealth Immigrants' Bill that would restrict their right of entry. Macleod was outraged at the breach of past promises - indeed it was the prospect that any further government assurances would be reneged on that was accelerating the pace of migration - and took steps to publicly commit himself to opposing the Bill before the Shadow Cabinet had agreed to support it. He did this by two ways, one was by firmly sticking to promises he had made as Colonial Secretary that he could not break, and the other was through publishing an article setting out his views whilst nominally in opposition to a Private Member's Bill in the Spectator, exploiting the publishing schedule, and thus made it impossible for him to do anything but oppose the Bill. It was a risky strategy but a courageous one. Macleod strongly believed "...quite simply in the brotherhood of man—men of all races, of all colours, of all creeds. I think it is this that must be in the centre of our thinking..." The idea that the character of citizenry was determined by a person's skin colour was complete anathema to him.

He faced the dilemma of being opposed to both racial discrimination but also to the idea that legislation can change people's minds and hearts. Ultimately he concluded the Labour government's proposed legislation was unworkable and wrong but that in no way meant that he endorsed the views it sought to tackle. However to help colleagues in the Shadow Cabinet he used his influence to get the Party to not vote against the Bill. After Enoch Powell made his notorious speech, Macleod refused to speak to him for the rest of his life. Later that year Macleod put his career on the line by threatening to quit if his friend (and later biographer) Nigel Fisher was deselected for being too liberal and replaced with a Powellite MP.

In 1970 the Conservatives won the general election in a surprise to many. Macleod had fought a good campaign and I know many Conservatives who can still recall his great oratory on display then. He became Chancellor of the Exchequer and seemed set upon a bold reform of the tax system but the following month he was struck down with abdominal pain and subsequently died of a heart attack. How the Heath government would have gone had he lived remains of much speculation.

But Macleod's legacy is clear to see. Progressive socially liberal conservatism that values opportunity for all, which sees a role for the state to prevent and correct societal wrongs, which is compassionate and cares for the most vulnerable in society, which seeks to free the individual as much as possible, and which seeks to control public spending firmly is present for all to see. In his youth John Major was an admirer of Macleod and much of his approach in government lived up to that legacy. Today's generation of Conservatives are less likely to remember and recall him but they too live up to his legacy.
Posted by Tim Roll-Pickering at 10:00 No comments: