The fall of Lembit Öpik

Iain Dale's Diary has this wonderful cartoon up of an AV ballot paper: 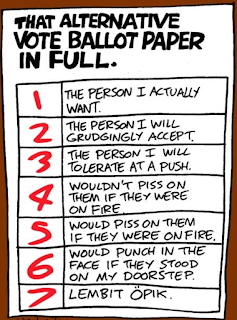 (Hattip to If Lembit were on fire...)

But when did Lembit have such a fall?

There was a time when Lembit was just a figure of fun, one of those wacky characters who enliven the fringes of politics more for their antics rather than their contribution to policy. Such figures have existed in all ages. Yet somewhere along the line Lembit has turned into an object of derison if not pure hate, even within his own party. (And this started before the Liberals had their first losing campaign in his seat since the days of Disraeli.)

Maybe it's because Lembit has stopped being funny and his efforts are now just irritating. Take for example this video for his campaign to be Mayor of London:

Even Wolfie Smith's dreams of power were more credible than this!
Posted by Tim Roll-Pickering at 15:53 3 comments:

The Australian state of New South Wales voted at the weekend, in an election that saw the 16 year old Labor government swept out of power in an avalanche. Such has been Labor's dominance in New South Wales that there's been no end of the use of words like "historic", "seismic", "unprecedented" and other clichés.

The main feature of interest for the UK is that New South Wales is one of two Australian states (Queensland is the other) which use optional preferential voting, i.e. the precise form of the Alternative Vote that we will voting on in May. Whereas in elections for the federal parliament and in most other states a voter is required to number all the candidates on their ballot paper for their vote to count, in New South Wales & Queensland state elections a voter need only indicate a single preference to be valid and does not have to worry about which of two utterly obscure independents they prefer to the other.

At the time of writing the results for the lower house so far:

I stress these are not yet final results. Australia has different rules of voting and counting, the key ones being in relation to postal and "pre-poll" voting, plus a much greater emphasis on precision over speed than the UK, and with results declared at the polling station ("booth") level there's a heck of a lot more to be precise about. Postal votes can arrive in a period of some days after polling day - in a large country with limited rural postal services it's rather unworkable to require all postal votes to be received by polling day.

(A lot in the UK seem to think Australian elections take a long time to finalise counting because they use the Alternative Vote. This isn't true - Canada also takes a similar time for much the same reason, despite using First Past The Post.)

Despite this about 92 of the 93 seat results seem certain. The one uncertain one is Balmain, currently listed as a Green seat. This is a three way fight between the Liberals, Greens and Labor with uncertainty over who will be in the last two - see Antony Green's Election Blog: The Tight Finish in Balmain. The one prediction that seems solid is that whoever wins the seat will not have at least 50% of the total valid votes cast.

Of the wider results it's notable that the Liberals have secured a majority in their own right on just 38.4% of first preferences. Some of this is because they didn't stand in 20 seats, instead giving the Nationals a free run (and indeed they will be governing as a Coalition), but there is no requirement for a party to contest every seat. Critics of First Past The Post like to jump on such results but as this election shows they can happen under AV as well.

92 seats seem to have been won by the party who topped the poll on first preferences - the exception being the aforementioned Balmain. In general the Liberals, Nationals, Labor and Greens declined to recommend preferences to each other on the "How To Vote" cards given out at polling stations. For those hoping to see AV producing radically different results it's not lived up to expectations. However Balmain may see a victory from third place.

Of potential more interest for the UK is the upper house election but that's for another post...
Posted by Tim Roll-Pickering at 13:49 No comments: