With a Scottish independence referendum on the horizon, unionists are looking for a heavyweight figure to lead their cause, who can take on the separatist arguments and who can win there.

Now who's the last person to beat Alex Salmond in Scotland? 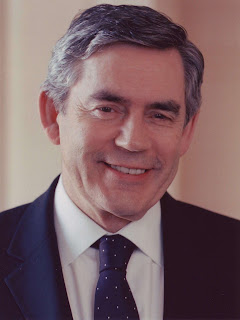 Gordon Brown may not be from my party. There is a lot of his political legacy I detest. But he is undeniably the biggest figure from Scotland to stride the political stage in recent decades. He is recognised globally and stands head and shoulders above the likes of... erm... whoever the current leader of Scottish Labour is.

So can we persuade him? Can we draft Gordon Brown to save the Union?
Posted by Tim Roll-Pickering at 00:10 1 comment:

A referendum is the will of the electorate. But just which electorate and how many of them?

Whether people like it or not, referendums are an established part of the way things are done in this country. It's been nearly a century since the first legislation was passed establishing them (the Temperance (Scotland) Act 1913 which allowed for local referendums on prohibition in Scotland) and they've become ever more common in recent years.

But less clearly established are the basics for referendums like who gets to vote, the precise requirements for a change to take effect and who selects the options available & writes the question. In the run-up to just about every referendum I can remember there have been rows over at least one of these. This ad hoc approach is not terribly constructive and it may only get worse with a referendum on Scottish independence that brings the prospect of a fourth mess, determining which legislature has the power to run the vote.

Determining who gets to vote is a mess to start with. We have several different electorates in this country, mainly because of the different voting rights of ex pats, EU citizens, members of the House of Lords and so forth. The result is some people can vote in some elections and not others. So which ones should get to vote in a referendum when it isn't obvious which tier of government it affects? And there's a further problem that ex pats within the rest of the United Kingdom don't get to vote at their former homes, whereas ex pats within the rest of the world do. Would it be fair if there was a referendum in Northern Ireland and a Belfast man who'd moved to Dundee didn't get a vote but one who'd moved to Dublin did? And then there's the issue about whether the voting age should be lowered for individual votes - which was already tried in an unsuccessful amendment to the AV referendum and which may be tried again for the Scotland vote. Will the young get the vote only when they might be expected to vote the right way?

Threshold requirements are another mess. Practice around the world varies quite widely - some jurisdictions require only a simple majority for change to be enacted, but others have all manner of additional requirements - minimum turnouts, minimum proportions of the total electorate, majorities in a minimum number of constituencies, supermajorities (60% or 67% are both quite common) and more. All of these are in place because of a belief that a change brought about by a referendum will be long lasting and should be resistant to a minor swing in public opinion undermining it. But these thresholds are normally predetermined in advance. Since most referendums in the UK have been called by those wanting to make a change by popular backing, unsurprisingly there's been a reluctance to add conditions that might make a change victory less likely. We've probably now reached the stage where it's too late to introduce such thresholds. That may seem democratic but it must be worrying that some referendums, particularly those creating elected mayors, have had very low turnouts - the lowest I'm aware of was 10% in Sunderland. There is a point where the result stops being the will of the people and becomes the will of the too few.

What about who gets to select the available options and write the question? We've already seen the opening shots in this debate this week. It's a difficult one with no obvious answer and for that matter the UK precedents aren't so great. We've only had two comparable referendums, one on which country Northern Ireland should be in, the other on whether the UK should stay in Europe. Here are the exact questions:

Both are simple and to the point. There's no reference in the former to precisely how Northern Ireland should be governed, regardless of which country it is in, whilst the latter similarly makes no reference to the revised terms of membership negotiated by the Labour government of the day. Nor were there multiple options to decide between, and thus no rows about which system to decide between the options.

But it could be more complicated. One case from elsewhere that is often brought up in relation to Scottish independence is the 1995 Quebec referendum. This asked the voters of Quebec the following question:


And if you think that's complicated, the 1980 referendum question was even longer:
(And considering the ballot paper was bilingual that's a monstrous piece of paper.)

One major consequence of the referendum was the federal parliament passing the Clarity Act which basically gave the federal House of Commons the power to decide if a future referendum question was "clear" or not, to determine the threshold for change, and effectively to veto a referendum vote if it was deemed to have not complied. The Quebec National Assembly passed counter legislation asserting a simple majority is sufficient and that no other parliament or government can impose constraints on Quebec. That particular legislation has the snappy title of An Act respecting the exercise of the fundamental rights and prerogatives of the Québec people and the Québec State. To date the supremacy of these pieces of legislation has not been tested in the courts.

Now the Scotland situation has not reached the levels of Quebec but if the current rows between London and Edinburgh aren't resolve soon then we could face a similar mess but I really hope it doesn't descend to a Quebec style mess of disputed questions, Clarity Acts and sovereignty assertion acts, complete with lots and lots of lawyers rowing for all eternity.

However in the long run something needs to be done to take the sting out of these questions. Ideally there needs to be a broad consensus across the board, and perhaps a standing committee to determine the options & questions, so that when a referendum is announced there will be no uncertainty about any of the factors, let alone a dispute about them. Until then each referendum will bring many more questions than just the one on the ballot paper.
Posted by Tim Roll-Pickering at 22:22 No comments:

"Mummy, what does 'santorum surging' mean?"

So far the US Presidential election is just dull.

Compared to recent contests this one just hasn't caught fire. On the Democrat side the euphoria from when Obama was first elected has now died down as even his most ardent supporters realise he can't walk on water and isn't going to deliver endless change they can believe in. But he's basically unopposed for his party's nomination. (Yes pedants I know there's probably a few non-entities who've managed to get their name onto the odd primary ballot paper but that won't make a difference.) The last incumbent President in such a position who went on to lose re-election was Herbert Hoover back in 1932. That should give Obama comfort until he remembers that Hoover fell in harsh economic times - and no Obama can't simply magic away the world's economic problems. We're not in Doctor Who!

On the Republican side we have the return of Mitt Romney and the succession of "stop Romney" candidates, and all it's done is reinforce perceptions of the Republican Party as full of nutters. Now just because I'm a British Conservative doesn't mean I should automatically cheer on anyone from one of our "sister" parties around the world - you don't see many Conservatives cheering on Nicolas Sarkozy and Angela Merkel at the moment despite their parties being founder members of the IDU. The nuttier wings of the Republican Party are not ones that should be copied here. But they can at least make things exciting - and at the moment that hasn't happened. Instead it's one long dull fest.

Of course there is the occasional moment of humour, especially with Rick Santorum. For there is a not very nice meaning for "santorum" and if he pulls off an early primary win a lot of people will be searching for more information on him.

So why are journalists so keen to write that "Santorum is surging"?
Posted by Tim Roll-Pickering at 16:33 No comments: