This Presidential election is boring.

Yes it's easy to say that from afar. But despite all the coverage and all I hear from friends and family in the States, I'm left with my strongest feeling being "So What?" about the contest and both the candidates. If only there was something truly out of the ordinary out there.

It wasn't always this way.

Back in 1976 the US was faced with an exciting choice of either four more years of Chevy Chase doing the same joke all the time or a fresh faced outsider who some thought would make everything better again. Or there was another campaign in fiction that actually garnered thousands of votes in real life. 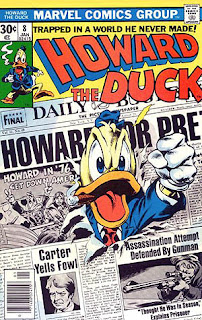 For many people if they've heard of "Howard the Duck" at all it's just as the name of a movie they've heard whispers of as one of the worst films of all time. Some may have heard of the intellectual property battles over the character, both the attempt by creator Steve Gerber to secure the ownership of the character and Disney's complaints about his similar look to Donald, forcing him into trousers. (Of course now that Disney own Marvel and thus ultimately Howard this should not be an issue. Has the duck finally dropped his trousers?)

But beyond the worlds of rubbish movies and IP battles, Howard the Duck was so much more. In 1975 he received his own comic book series that rapidly became a strong cult favourite. The key to understanding the series is that it's an existentialist satire in which the difference between seriousness and silliness is just a point of view. In it a foul tempered talking duck from another dimension wanders through our world, exposing and commenting on the absurdities around him.

Whilst travelling from Cleveland to New York, Howard and his human friend Beverley Switzler take jobs at the All-Night Party convention. Soon Howard finds himself as the party nominee on a platform of straightforward, honest offensive talking. He rapidly attracts the assassins and smear merchants. 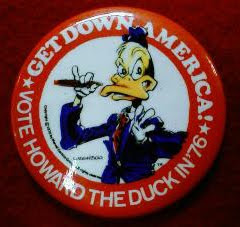 With the slogan "Get Down, America!" and a managed campaign that tries to avoid saying anything, Howard could have swept to victory. But then on polling day the papers fall for a hoax and print an appallingly composited picture that purports to show Howard and Beverley in the bath together. These were the days before widespread early voting and the Clintons so Howard's chances evaporated. Nevertheless in the real world thousands of voters found a fowl talker from another dimension a better prospect than Ford or Carter (I can't imagine why...) and wrote-in votes for the Duck. Imagine if so many had done so and he'd actually won electoral votes...

But now in 2012 we have a boredomfest inflicted upon the entire world. If the media could leave the election to the States it would be okay, but when it fills the news everywhere one can't but express a rather loud yawn.

Is it too late to suggest people write-in Howard the Duck once more?
Posted by Tim Roll-Pickering at 10:00 No comments:

Tipping may not be a place in China...

...but that doesn't mean it should be compulsory.

The other night I was in a restaurant where the food was good but the service less than spectacular. In particular the waitress was invisible at some key moments such as when my friend wanted an additional item which took forever to ask for and then to come, and then when we needed to settle the bill in a hurry, due to one of us having a train to catch. (Given the restaurant's location, that can hardly be a novel situation.)

So I was not exactly amused that when the waitress came back to collect payment she paused to circle wording on the bill stating "Service not included" and asked one of us to write in a final total on the paper bill, in spite of the card reader including a stage to add such a tip discretely. She then proceeded to compound her errors by handing first the reader and then the card to the wrong person even after we'd manually corrected this.

Because of this poor service and upfront pushiness we opted to add nothing to the card payment and left no cash tip. In this decision we were unanimous.

Service should always be included in the upfront price - that's basic consumer transparency and employee protection. Staff wages should never be random amounts at the whim of how customers feel at the end and tips should be a bonus reward for good service, not an automatic hidden fee. And substandard staff who push their luck deserve what they get (or rather don't).

In fact making staff rely on tips is illegal in this country. "Service not included" is a very misleading form of wording that takes advantage of the unsure and encourages presumptions on both sides that tips are automatic. It is perfectly legitimate to refuse to give a tip, especially when the service is not up to scratch. And if the serving staff decide to drop utterly unsubtle hints then they deserve it to backfire.
Posted by Tim Roll-Pickering at 10:00 No comments: