Which US Presidents were denied renomination?

It's looking like Donald Trump will be challenged for the Republican nomination in 2020. (Washington Post: Curtain rises in New Hampshire with president's appearance) Invariably some want to know how many previous presidents have failed to be renominated by their party.

As with many historical questions about US presidential selections this is not simple to answer. Not only has the nomination process changed over the years but also there was historically a lot of smoke and mirrors. In the 19th century there was a widespread belief that one shouldn't seek the presidency but rather be drafted to it. This wasn't quite how some of the candidates approached things behind the scenes but it meant that they didn't always leave the biggest public clues. Sitting presidents were often most subject to this, presenting an image of standing again by popular demand, often only formally declaring their intentions just before a convention vote or even not until an acceptance message.

There was also a belief that presidents shouldn't serve more than two terms, but this doesn't seem to have been adhered to by that many. Between 1837 and 1952 just about every president who completed two terms seems to have considered another, either consecutively or a subsequent comeback. But how far these bids went isn't always clear.

How parties pick their candidates has also evolved. Initially candidates were selected by the Congressional (parliamentary) parties. This system broke down around the 1820s and by the 1840s all the significant parties had adopted the model of a national convention voting on prospective candidates. Delegate selection was initially by state party leaders though in the early 20th century a populist revolt introduced various forms of direct voter involvement through primaries and caucuses in some states. However political leaders managed to nullify some of the effects by limiting the number of delegates selected and/or by running local figures as "favourite sons" in the primaries, with the prospective candidates often not formally announcing until later and treating the primaries as a means of testing the water rather than a formal contest. This system broke down in 1968 with the mess of the Democrat nomination that year, leading to an opening up of the primaries and it is now extremely rare for the convention itself to have any role in selecting the nominee beyond stamping the primary winner.

With all these caveats, here are the various presidents that one way or another wanted renomination but did not obtain it: 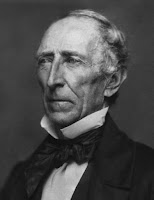 John Tyler. Elected Vice President on the Whig ticket in 1840, Tyler was the first to succeed in office. He rapidly proved a disappointment to Whig leaders, vetoing much of their plans. Effectively expelled from the party in late 1841, he governed pretty much as an independent and thus was never under consideration for the Whig nomination in 1844. He instead formed a briefly lived "Democratic-Republican Party" (reusing the name of Thomas Jefferson's old party) which nominated him for the presidency though his efforts were more focused on getting the Democrats to adopt a policy of annexing Texas rather than on re-election. When the Democrats nominated Polk and delivered the assurances Tyler dropped out of the race.

Millard Fillmore. Elected Vice President on the Whig ticket in 1848, Fillmore succeeded in office in 1850 and used the influence of the White House to secure the Compromise of 1850 to settle issues between the free and slave states. However this left the Whigs bitterly divided. At the 1852 convention Fillmore was proposed but lost in the succession of ballots to Winfield Scott. Later in 1856 Fillmore would run as the nominee of both the Know Nothing Party and what remained of the Whigs. 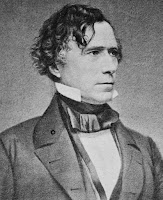 Franklin Pierce. Elected President in 1852, Pierce is the clearest case on this list. Proposed for the nomination at the 1856 Democrat convention he lost in the balloting. 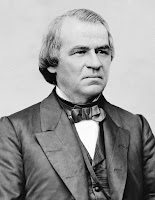 Andrew Johnson. Elected Vice President on the "National Union" ticket in 1864, which combined Republicans with War Democrats, Johnson succeeded as President the following year. A Democrat by background, Johnson fell out with the Republican leaders in Congress and the National Union umbrella dropped away. In 1868 Johnson was proposed for the Democrat nomination but did not have enough support in the ballots at a lengthy convention. 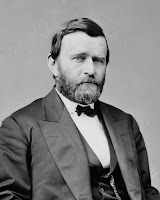 Ulysses S. Grant. Elected President in 1868 and 1872, Grant contemplated a third term but in 1875 the House of Representatives overwhelmingly passed a resolution in favour of the two-term limit. Facing such political opposition he dropped his hopes for 1876, but later in 1880 he sought another term but did not succeed at the longest ever Republican convention. 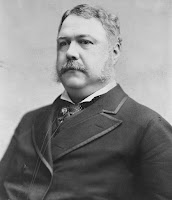 Chester Arthur. Elected Vice President in 1880, he succeeded in office the following year. He contemplated running for a full term in his own right in 1884, but suffering from illness and with the Republican factions lining up behind other candidates he ultimately declined to make a serious effort but did not formally drop out of the running as he felt it would raise too many questions about his administration and health. 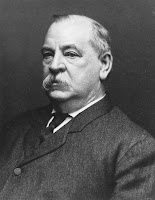 Grover Cleveland. Now this is the one that is probably the most unclear. Elected President in 1884 and defeated in 1888, in 1892 he became the only former President to return to the office. In the run-up to the 1896 election he did not make his intentions clear one way or the other and so was a possible contender going into the Democrat convention. However the policy debate at the start of the convention repudiated Cleveland's administration on the central economic question of the day (gold s silver) and so any attempt to secure the nomination for Cleveland would have been a waste of time. He was not proposed at the convention, with his home state delegation of New York abstaining on the initial ballot along with New Jersey. A group of "Gold Democrats" did make try to make a third party nomination of Cleveland but he refused it. Later in 1904 the pro gold Democrats recaptured control of the party but Cleveland turned down requests to stand again. 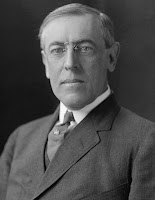 Woodrow Wilson. Elected President in 1912 and 1916, he suffered a stroke in late 1919 that limited his attempts to get the US to ratify the Treaty of Versailles and join the League of Nations. Despite this he held out hopes of being renominated in 1920 but this seems to have been the delusions of an isolated man surrounded by people who wouldn't point out the realities to him. He had further hopes of a comeback in 1924 but died at the start of the year.

Harry Truman. Elected Vice President in 1944, he succeeded in office the following year and won a full term in 1948, he was given an exemption from the formalisation of the two term limit in the Twenty-Second Amendment. By the time of the New Hampshire primary he had not yet found an anointed successor or announced if he would restand, but assented to his name being put on the ballot paper. Defeat in the primary led to his announcing he would not be seeking a further term. 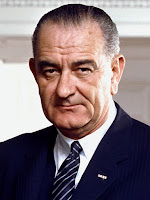 Lyndon Johnson. Elected Vice President in 1960, he succeeded in office in 1963 and won a full term the following year. Under the terms of the Twenty-Second Amendment he was eligible to be elected again in 1968. Like Truman he assented to his name going forward to early primaries but announced he would not seek the nomination after adverse results.

As can be seen from this list, other than Millard Fillmore and Franklin Pierce it's not easy to say for sure which sitting presidents actively sought renomination but were denied it. Several abandoned plans before formal votes, others treated the primaries as testing the water rather a formal campaign, some had delusions of their essentialness more than anything else, others had already broken with their party, one was making only a token effort. Exactly what does and doesn't count (and even Fillmore's inclusion is arguable given that he was a Vice President who succeeded) makes this list one to debate endlessly over.

The debacle of the Democrats' 1968 nomination has led to the process being opened up with a much more public process and so it's no longer possible for someone to be as ambiguous as Truman or Johnson were about whether they were seeking nomination (in 1964 Johnson only formally decided close to the convention, after the handful of primaries were won either by him or by loyal "favourite sons" collecting delegates). Gerald Ford, Jimmy Carter and the elder George Bush all faced serious challenges in the primaries. All defeated them but went on to lose their re-election bids and these are the only sitting presidents defeated in the general election in nearly ninety years.

However before anyone rushes to plan a party for Trump's defeat, bear in mind that he has already broken a lot political wisdom so a serious challenge in the primaries may not spell doom for his hopes.
Posted by Tim Roll-Pickering at 10:00 No comments: