Things get worse for Ming

First off Campbell sought to reverse his party's policy on giving the vote to prisoners. But as some have noticed, Ming doesn't have the power to change party policy - only the party conference does and no-one expects it to do so. Ian Dale has noted some other Lib Dem policies on law and order, some of which they were less than happy to be reminded of during the last general election:

The Lib Dems would scrap mandatory life sentences for murder and for a second serious sexual or violent crime. Lib Dems voted against the legislation introducing anti-social behaviour orders (ASBOs) and dispersal orders. They would send offenders on go-karting trips because it would 'disincentivise' crime (Mark Oaten, Q&A session at Lib Dem Conference, Bournemouth, 22 September 2004). Repeat offenders should not go to prison, but remain in the community 'by imposing a curfew requirement or tagging them' (Lib Dem Press Release, Liberal Democrat proposals for tough community sentences, 17 November 2003). Simon Hughes has said 'I am clear... as Liberal Democrats have always been clear, that there should never be mandatory sentences. We have argued against such sentences for murder and in respect of lesser crimes... I think they are wrong in all circumstances' (Hansard, 13 January 2003, Cols. 433 and 437). 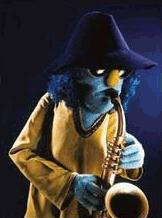 And there's another crisis in home affairs - the Lib Dem home affairs spokesperson Nick Clegg has been caught slagging off his leader in earshot of a journalist and has failed to issue a denial:

Ming the Mediocre, according to Clegg, is hesitant and disorganised, commits avoidable errors and lacks momentum but - this was the loyal bit - is capable of recovering. With friends like Clegg, who needs Simon Hughes?

Indeed. Hughes may have been the first to get into the public domain on this but once again he has been shown to be replacable. Clegg is seen by many as the Lib Dems' best hope for the future - at times it seems their only hope - but now he's piled in on the disloyalty and undermining that is all too common amongst the Lib Dems. The way things are going, labeling 2006 the Lib Dem Year of Three Leaders may be an undercounting!
Posted by Tim Roll-Pickering at 00:54