My earlier post Ervine in, Women out has attracted a lot of attention, more for Ervine than for Women which is probably saying something about the long term impact of the Women's Coalition. But as for David Ervine... 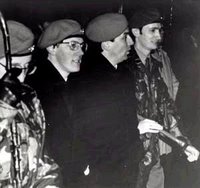 I appear to be one of the few bloggers to have commented on the story without immediately condemning it. At one level this is a natural progression - the Progressive Unionists supported the Ulster Unionists in the last Assembly, providing a crucial pro Good Friday Agreement majority within the Unionist assembly members at crucial times. Nearly all the major parties in Northern Ireland have had dealings with terrorist groups at one point or another - much is being made of the fact that the DUP and UUP voted in as Lord Mayor of Belfast the Progressive Unionist Hugh Smyth back in 1993, whilst I'm sure the DUP can't be happy with reminders of their links with Ulster Resistance being brought up, such as this photo of deputy leader Peter Robinson. He wasn't at a fancy dress party! 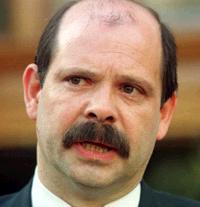 I don't doubt that long term reconnecting loyalism with the political mainstream is a desirable move. But in the short term what has Ervine's joining the UUP Assembly grouping achieved? It may give the UUP an extra seat if the Northern Ireland Executive is ever reconvened, but the way this is presented as a triumphant snatching from Sinn Féin which can do little to build trust between parties, let alone the nationalist electorate who can only look on in bewilderment and wonder why an active undecommissioned UVF is more acceptable than a ceasefired decommissioned IRA. The UVF has yet to declare a ceasefire, although if the UUP could somehow negotiate one it might in the long turn prove to be the most positive benefit of this whole affair.

The main problem is that for all the talk of these benefits, it has emerged that Ervine was not the first Assembly member approached by the UUP. The numbers game in the Assembly is such that they have been one member short of another potential ministerial post for some time now. And it appears that Ervine was not the first to be approached but was instead one of the last approached in Sir Reg Empey's search. In such circumstances one has to wonder just how principled a stance this is. And how would some of the other potential recruits have been received? 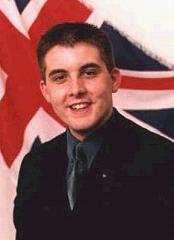 Amongst others who appear to have been approached is Paul Berry, well known for an incident with a male masseur in a hotel room that eventually led to his leaving the DUP. In recent times Berry has become a figure of ridicule for this, obscuring the fact that he has a reputation for being incredibly partisan against the UUP and more generally being fiercely sectarian even by DUP standards, with some describing him as the natural heir to the William McCrea tendency in the party. Whilst Berry may be seeking to rebuild his political career through helping Unionism, many in the UUP would have had real personal objections to his joining. However I'm not sure what they would have made of his sexuality. 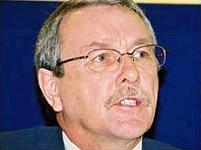 Speaking of gay issues, another who was approached was former Alliance deputy leader Seamus Close. Close is most famous in recent times for his leading opposition to Lisburn City Council's marriage room being used for civil partnerships. Despite being a negotiator to the Agreement that includes "a statutory obligation on public authorities in Northern Ireland to carry out all their functions with due regard to the need to promote equality of opportunity in relation to religion and political opinion; gender; race; disability; age; marital status; dependents; and sexual orientation", Close opposed these particular alliances. Many in Alliance were outraged. One can only but wonder what would have happened if both Berry and Close had joined the UUP (although it would have solidified their position in the Assembly). Indeed how would the UUP feel about its image in much of the rest of the UK with such a controversial figure on board? 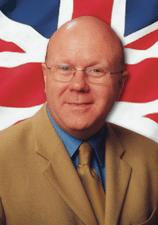 The other name being thrown about is Mark Robinson, a sitting DUP Assembly Member who is seemingly at odds with many of his party colleagues and seemed a potential defectee. I know little about Robinson, though I'm not aware of his being related to Peter and Iris Robinson (which makes a change - Northern Ireland is full of political families such as the Paisleys, Fosters, Beggses, McGimpseys, McCreas, Doddses, Alderdices and so forth - although I can't off the of my head think of a Nationalist family). This would probably have been received with rather less reaction than Ervine, or for that matter the defections from the UUP to the DUP of Norah Beare, Jeffrey Donaldson, Arlene Foster or Peter Weir. But clearly he declined, so the UUP have looked elsewhere.

Seeking support and recruits from outside your own party is a natural part of politics - indeed one of the current ministers at the Northern Ireland Office, Sean Woodward, started off as a Conservative MP before defecting (which in the long run did the Conservatives more good than Labour, as Woodward's successor as MP for Witney is David Cameron). But trying to present it as some great principled move for another purpose can only backfire when it is exposed.

More generally the Ulster Unionists have once again shown an inconsistent direction. They have repeatedly alternated between trying to appeal to both the alienated Protestant middle classes and Catholics by following a liberal line and trying to out hardline the DUP. The problem is that one cannot easily do both. Pursuing one is liable to alienate the other and the UUP seems to be finding ways to alienate both. Exactly where are they finding political support other than perhaps the handful of Progressive Unionist voters?

The best way Empey can try to overcome the uproar is to utilise the link as best as possible and to devote all energies to getting loyalist ceasefires and decommissioning. A few statements of high minded altruistic intentions rarely succeed in the purpose - one must show sincerity by going back again and again and again to the problem at hand and keep working at it until there is a proper resolution. Of course one can ask if Empey will be there long enough for this but it doesn't look as if his leadership has reached Campbell levels of danger yet.
Posted by Tim Roll-Pickering at 23:27