Who should be the next US President?

Over on Iain Dale's blog there's some speculation about who will be the next US President. Leaving aside the possibility that George W. Bush dies in office (although we've yet to see if Tecumseh's curse of Presidents elected in a year ending in a zero always dying in office truly has ended or if Ronald Reagan's survival was just an anomaly), speculation about the Republican candidate is growing. 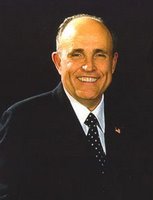 Personally I'd like to see Rudy Giuliani run. He's on the bearable wing of the Republicans, has shown great leadership in turning New York City around and holding it together on 9/11 and could do much to restore the reputation of the US across the world. Already so-called "pro lifers" (sic) are declaring their opposition to a Giuliani candidature which is a good sign that he has the right enemies. Draft Rudy Giuliani has launched the campaign for him to be President. 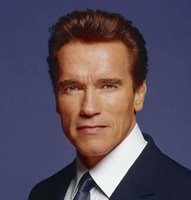 Sadly my preferred Vice-Presidential candidate is unlikely to be available at the moment due to the current provisions in the US Constitution baring people not born in the US from running. Otherwise Arnold Schwarzenegger would make an interesting choice. I am sure many would agree with his principles of balancing budgets, removing incompetent public officials from office and delaying the making of any more Terminator movies!
Posted by Tim Roll-Pickering at 02:01

I am really looking forward to the next election as Giuliani, Hillary Clinton and Jesse "The Body" Ventuna plan to run and all three would make for great presidents. Pity that Arnie wouldn't be able to run, but his time will come again.

Speak of Giuliani, I heard a rumour just over a year ago about how Dick Cheney would stand down at the end of this year as VP and be replaced by Giuliani. The rumour also stated that Giuliani would Bush's "official" choice as successor.

Giuliani was not a particularly popular leader before 9-11. He was the right guy, in the right place. I don't think we should be electing a President based soley on their action on one day. There are more issues than that.

Schwazennager(excuse my spelling) is a joke. He has a disgracefully low approval rating in California, and has managed to alienate both teachers and hospital empoloyees. He is an incompetant leader and would be an absolute dreadful choice for VP.

I haven't decided exactly who to suport yet, though I am leaning to Russ Feingold or Joe Biden.

Giuliani headed the seemingly impossible when New York Cit was turned around and made a much safer place to live. And as a far more bearable Republican than most he could avoid the odium that the US currently gets with the lesser Bush in the White House.

As for Arnie, it's all a bit academic at the moment given the constitutional bar. But equally the post of Vice-President is not exactly the most respected political office in the world. But Arnie is again more bearable than most Republicans anyone's heard of over here (and unknowns are an even more scarey prospect). And from an admittedly international perspective he'd make the election fun to follow.