The men who created Doctor Who

Fifty years of Doctor Who

Many hands went into the creation of the series and others came up with the ideas that made it last so long, but there were three people who devised the basics in a meeting in March 1963 and ultimately are the show's creators. One is well known in connection with the series, another for his wider television work and the third has now sadly been forgotten.

C.E. Webber is by far the most forgotten. A BBC staff writer who wrote up the discussions into the series's first format guide, he ultimately captured the essence of what the series would be and sketched out the basics that would be returned to time and time again. He wrote what was intended to be the first ever story but it was ultimately not used and his material was instead used as the basis for the first transmitted episode though his co-authorship was not cedited onscreen. Much forgotten for a long time, in recent years fan historians have rediscovered his role. There are few photos of him available - the one here is cropped from a group shot where he's sitting next to Enid Bignold (Samantha Cameron's great-grandmother).

Donald Wilson spent 1963 changing jobs as the BBC Drama Department was heavily reorganised, going from the Head of the Script Department to the Head of Serials. He contributed ideas to the creation of the series and then served as what would later be described as the show's "Executive Producer" for its first two years, though he curtailed his input after his reservations about the Daleks were proved wrong. Otherwise he had a long career writing and producing television, with his greatest work being the 1967 adaptation of The Forsyte Saga. 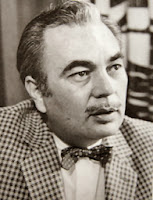 Sydney Newman is by far the best known of the three. He spent much of his career putting people's backs up and doing things differently; with longstanding results such as The Wednesday Play or The Avengers, as well as Doctor Who. But he sometimes opposed what turned out to be big successes with both the Daleks and The Forsyte Saga making it to the screens in spite of him, not because of it. A brash Canadian who had shaken up drama first at the Canadian Broadcasting Corporation then at the Associated British Corporation (the ITV weekend franchise for the Midlands and the North) before coming to the BBC at the end of 1962 and shaking things up with a strong determiation on realism and the masses instead of just adapting elite classics. In later years he returned to Canada and served as chairman of the National Film Board, where he continued to outrage others and had to have armed guards patrolling the headquarters during the October Crisis.

These three between them came up with the basic ideas for the series, both the character types that the show has returned to time and again, and the core philosophy of storytelling. Unfortunately there has never been a "Created by" credit on the series (and there wasn't an official system for designating particular personnel as a "series creator") but they are not forgotten.
Posted by Tim Roll-Pickering at 17:16

Interesting post thanks Tim, I knew I could rely on you to honour Dr Who's anniversary appropriately - hope you're enjoying the new episode