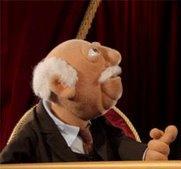 News has come through that Lembit Öpik has left the Liberal Democrat Frontbench Team to campaign full time for the position of President of the Liberal Democrats. (BBC News: Opik leaves Lib Dem front bench) He is in a fierce battle with Chandila Fernando and Baroness Scott. Tellingly several senior Welsh Lib Dems are not supporting their former leader. And there have been rumours, officially denied of course, of a plot by Vincent Cable and others to prevent a Lembit victory. (BBC News: 'Stop Opik' plot denied by Cable)

I don't know why they're bothering. People do not talk about the Curse of Lembit for nothing. It may have just failed to sink Nick Clegg but there's a whole trail of ex leaders and unsuccessful candidates who had Lembit's support and found they needed it like a hole in the head. Why does he think he can buck the trend himself?
Posted by Tim Roll-Pickering at 17:29

He's a walking disaster. Anyone faintly tempted to vote for him should google image him. There he is grining like the cat that got the cream, a disgusting cheeky girl either side of him. Plenty of saddo creepy piccies like that there. Or maybe access the idiot on a segway at his party conference. Yes, with the credit crunch et al, he chooses segways as his cause. This buffoon has no judgment whatsoever. Why was he even on Clegg's "front bench"?

Wednesday, October 15, 2008
Looz Muze World Exclusive...........Lembit's bold new initiative
Tonight I am really thrilled to hear of yet another demonstration of just how exceptional this man is. Until last week I had no idea of the critical role Lembit Opik had played in the Northern Ireland peace process. Later this week he will be telling colleagues in Northern Ireland "The success of the peace process in Northern Ireland can inform our work as we attempt to tackle the terror of guns, knives, bombs and physical aggression n our increasingly violent society" He is meeting with them to discuss the successes and the lessons from the peace process with a view to informing his "Root Cause, Root Solution" initiative.

Lembit says "It's time to tackle the root causes of violence in our communities. People suffer violence at a personal level in the form of domestic abuse, at a local level from gun and knife crime and at a wider society level from bombing and terror. I want us to share our experiences of the Northern Ireland Peace Process to the benefit of communities at home and abroad."

"Root Cause Root Solution will form a central plank of the Party President's office if I am elected to the post. It is the duty of the President to connect the party to the public to help the leadership of the party generate solutions that really work. I intend to work closely with people and communities who are prepared to listen to each other in order to build trust, respect and relationships _ and if that means listening to the boy or girl with the knife or gun and the man or woman with the bomb - then I will"

I have one response - go Lembit go!!!!! We need people with your grit, determination and courage if our party as you so rightly say is to move out of pretty pastels into primary colours. I want a President who will take risks, will challenge, be honest, listen........but above all be a catalyst for the change we all so desperately want to see. In picking up this issue Lembit has reached to the core of all our beings. What really matters when the chips are down? If we can't have an intelligent response to global terrorism, to gun crime, to the violence that impacts so many of our neighbours and loved ones, we will never ever really "make it happen".

There has been a lot of s**t chatted about Lembit in the blogosphere. So, the great and the good think he doesn't quite come up to their straightlaced, straightjacketed, tight ar**d image of what they think a President should look like. Well...........I am long enough in the tooth to remember the bile dispensed about Simon Hughes last time, how wrong those prophets of doom proved to be!

In this election be very clear, we are seeing a new Lembit. A Lembit who has been tested in the fire after a year of personal heartache, and has come out fighting. He can and he will be just the tonic this party, and more importantly, this country, needs.